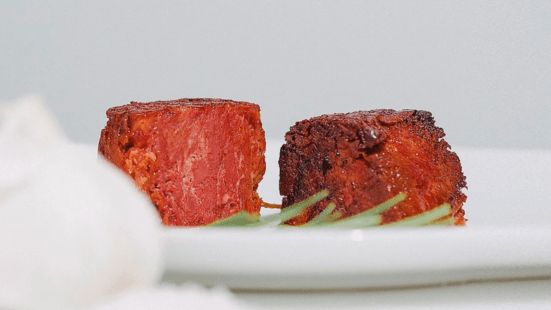 The founders of Juicy Marbles Plant-based Steaks, Tilen Travnik, Maj Hrovat, Luka Sincek and Vlad Mickovic are on the Plantbased Business Hour to explain how they make the world’s first plant-based steaks and discuss what is the future of plant-based whole cut meats.

Below is a highlight clip and transcript from our long-form interview on bringing back the joy of getting creative in the kitchen and experiencing community at the table.  .

Elysabeth: I’m wondering if you could share your business perspective about what’s really driving you here. Is it that desire for change or is it the enormous monetary potential here with a product like plant-based steak?

Elysabeth: But hold on, come on, that’s a big part of it, as well.

Vlad Mickovic: It’s the internet, we want the internet money. Obviously, you know, it’s really poetry in life when you create value externally and also for yourself, right? So, I think all of us are impact driven. We can go into a very philosophical selfish discussion about how there’s always a present, but I don’t think that’s necessary.

We really want to help aid and change the food system for the better and the food culture, right? It’s not just the food system, obviously with its faults and animal agriculture being obviously very ineffective in feeding the world.

Also the food culture is taking quite a hit since the fridge got invented or something. Now we have all these grey-goo startups telling you that you don’t even have to eat. You can just drink.

We really also want to champion the pleasure of food and what the ritual of food brings about and also [that it’s] the most intimate sacred ritual you can perform for yourself and for others, right, the primal one that is kind of slipping away from our culture. So that’s one aspect and, obviously, you know why we started with beef is the inefficiencies of the food system. You know beef alone takes sixty percent of all agricultural land while providing two percent of the world’s calories. And there’s much more data like this that just makes it seem like this is not working, right?

So this is not even necessarily an ethical question if people care about animals and stuff like that, which I think they should, but it’s really a humanitarian issue, as well. Maybe that’s one of the things that’s not even talked about that much. Basically out of seven hundred eighty million people who are under the poverty line, most of them are the people that produce the food and that’s because we distribute a crop so unevenly because we have to feed the cows that need to feed the wealthy west and so forth. So there’s so much to be done in the food industry.

By the way, we’re not here saving the world. We’re doing a little part. We want to have as big an impact as we can have and we see planned meat analogues will play a major role in hopefully developing a livable future.

Tilen Travnik: I struggle the most when I have good friends who are not vegan or even parents or family struggle with what they can cook for me or my family that will appear a decent meat substitute to them but will still be plant-based. So that’s one of the challenges is the unifying factor such a product can have so you can sit down as an unsplit family again and don’t have to sacrifice you being a vegan. In the case of myself [I] go into semi conflict on what I’m feeding to my kids.

Vlad Mickovic: He really just wants his friends back.

Elysabeth: Well, I was going to mention that. I mean part of the beauty of this is, and I’ll throw up a picture here in a minute, is that the steaks arrive, not technically raw, but your experience with it is as if you were receiving a raw product. So I had a conversation with an advisor of yours the other day and about “is it raw? Is it not raw?” So it has been pre-cooked and that’s why you can ship it shelf stable. Once you open the package, you have to cook it within about a week, I think, but generally you would consider it shelf stable.

But your experience with it is you would cook it up just like any chef prepares their meat: salt and thyme and sage and whatever you want to do with your meat so that the cooking experience is still there, so that you can have that communal experience like Vlad was talking about of making food for yourself and making something special that only you would create and share and give to others.

Food is that ultimate connector, right? We all come together over food which is why it’s been a pity, to riff off what Tilen said, to feel that there’s a little bit of a divide sometimes if you come to the table as a plant-based person and then everyone sees this as a schism between the group, which obviously it doesn’t have to be.