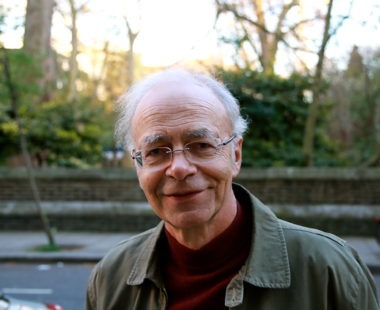 Peter’s many books, but notably, Animal Liberation, and also, In Defense of Animals, map out with clear logic and science the fact that animals suffer. Peter then argues that since animals suffer, it is unethical to treat them as objects or possessions. He continues by stating that to ignore, or worse, to instill suffering on sentient beings is unethical and immoral.

Given Peter’s schedule, he rarely gives interviews. He teaches at both the University of Melbourne at the Centre for Applied Philosophy and Public Ethics as and Princeton as a Professor of Bioethics. We hope that you enjoy this rare interview from Peter’s home in Australia in which Peter and I discuss the basis for speciesism as noted in Animal Liberation, his pet X-lab rat and how to take on big government. Listen in to the legend himself. Peter also gives his tips on defending the rationale for veganism to others and divulges his favorite snack!

I do hope that you listen to the entire interview. But if you only have time for one snippet, enjoy Peter’s explanation of Speciesism. While Peter didn’t coin the phrase, he did popularize the term, making it a fundamental building block of one’s defense against the abuse of animals.

Peter and I also discuss the easiest way to induce change. It doesn’t require any work at all. Zero protests. Zero activism. If you want change, buy products that are good for animals, the planet and you! Ultimately, we vote with our wallets. We change the world with our wallets.

The Wild Ride To Going Grey