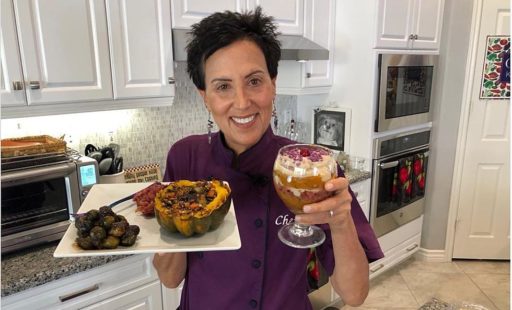 Chef AJ tells her incredible weight loss story and how this catapulted her life to books, media and the ultimate in happiness: feeling great! She also shares some great tips in the kitchen and gives plenty of encouragement for those on a weight loss journey.

There’s not only a benefit for us in going vegan but there’s a benefit for the rest of the world. When Chef AJ started to become vegan she had some slips and went back to eating junk food but never to animal products because she originally became vegan for ethical reasons. She grew up in a kosher home where she was exposed to far fewer animal products than the typical American. She never tasted bacon, pork, lobster or shrimp so she did not have to give as much up when she became vegan. She also grew up with pets in the house so she made the connection early that animals are for loving and not for eating. 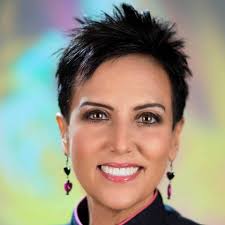 If you are interested in starting a plant-based diet, check out my 5-Day Jumpstart Plan to get you going.

Chef AJ grew up in an overweight household where her family members suffered from diseases like heart disease, diabetes, and cancer and she suffered a lot from her weight. She became vegan at age 17 but remained obese until she was 52 which was 8 years ago. Over the last eight years she has kept 50-60 pounds off with her delicious and healthy plant-based diet.

Before that she weighed 200 pounds as a vegan because she consumed a lot of sugar and fried foods and was not eating fruits, vegetables, and grains. At age 43 she developed pre-colon cancer because she wasn’t getting enough fiber in her diet. For 26 years she lived as a vegan this way until she badly hurt her knee and was unable to use crutches because of her weight. This made her realize she needed to change her diet in order to get healthy. 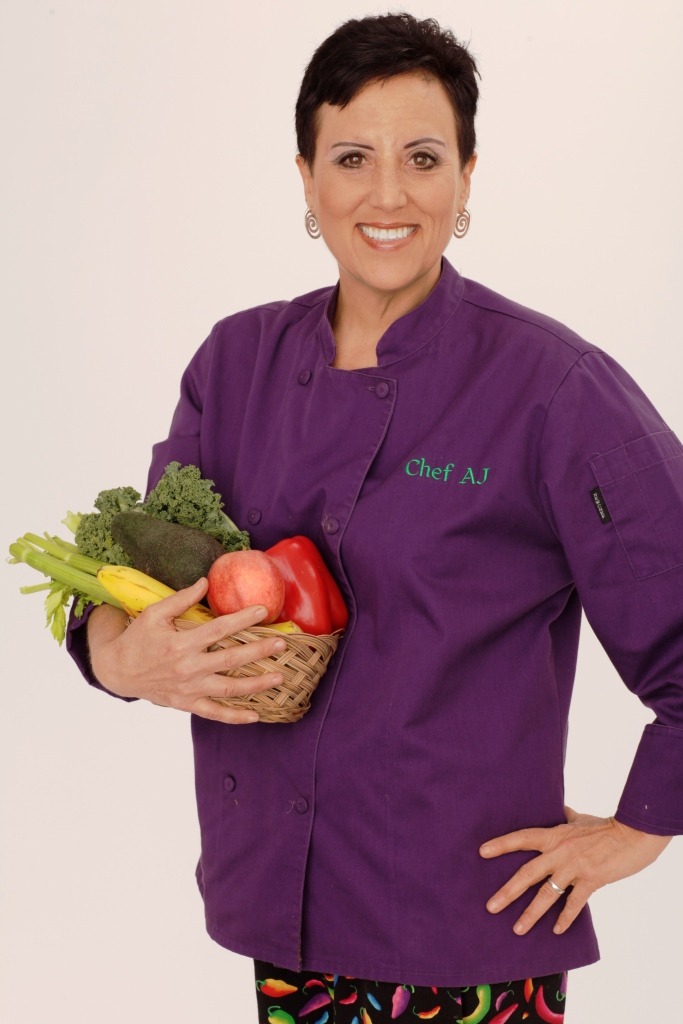 Chef AJ says being vegan is the healthiest diet on the planet but with junk food being so prevalent there are bad versions of vegan diets that could lead people down the same path that she dealt with. You can have a treat from time to time like oreos or twizzlers but you also need to consume plenty of nutritious foods.

According to Chef AJ, and I agree!, if you can be the best version of yourself as a vegan then you will become a better ambassador to help others do the same. If you want people to flock to your diet and become as healthy as you then you need to be a healthy role model.

If you are in the position she was in and you don’t know where to start, start by eating more fruits and vegetables. It’s hard for people to give things up so they should think about addition rather than subtraction and more ways that they can add fruits and vegetables to their diet. Chef AJ mentions how dairy has to leave people’s diets because there is no evidence that dairy is healthy for anyone besides the baby cow it was made for. If you’re not ready to give up meat altogether try cutting back and swap out meat for plants or beans.

Here are Chef AJ’s Top 5 Tips and Tricks in the Kitchen!

There’s so much variety in vegan diets and it’s not so much about missing foods because you have so many options. If you compare the few kinds of animals people eat to the 18,000 different kinds of beans and how many different vegetables there are, it gives you so many more options. So many vegan recipes are easy to make which shows that it does not have to be as difficult of a transition as people think. Chef AJ emphasizes the idea of committing to several vegan meals for a few days and seeing how you feel. Chances are you will feel much more energized and healthy which will make you want to continue eating that way. 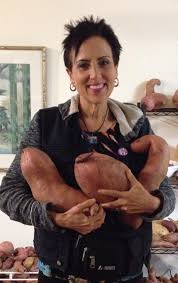 Chef AJ only eats two meals a day because that’s what she has always done. She never wakes up hungry so she doesn’t eat breakfast and just sticks to lunch and dinner. She eats her favorite lunch almost every day which is a pound of roasted sweet potatoes with a pound of broccoli. One of her favorite dinners is a stir fry with bell peppers, fire roasted onions, rice, purple cabbage, carrots, scallions and other vegetables. For desert she usually has some type of fruit or frozen fruit. She keeps her meals large but very nutritional. 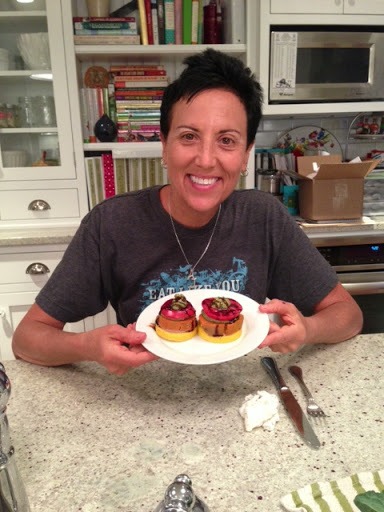 Here’s What Chef AJ Eats in a Day!

The importance of being at a healthy weight is because you are at a lesser risk for disease than because of the aesthetic looks or body standards. She just wants people to be healthy, and many times losing weight creates better health benefits. The famed Chef runs an online summit every year called The Truth About Weight Loss. One of the main things she talks about is how the hours from 10 to midnight is the time when your brain gets cleansed while it is asleep so if you go to sleep too late you can miss those important cleansing hours. She stresses how important sleep is in a healthy lifestyle along with a good diet and exercise.

Chef AJ’s number one tip in the kitchen is that water is free. If your recipes are flavorful enough you can use water in almost every place you use broth or you can use broth from scraps in an instant pot. For example, things like water and mushrooms or mushroom powder make great mushroom broth. Chef AJ’s prediction for the future is that people are going to be forced to go vegan whether they want to or not because meat will either not be produced or it will become too expensive. She mentions how people were sold so much misinformation where they thought meat gave them protein and milk is healthy for you. The things they are told to eat like meat and dairy actually lead to diseases so she reminds everyone how important it is to advocate for yourself because in a way you are the only one looking out for your health.