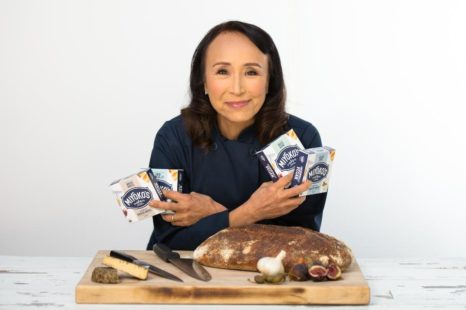 We all go crazy for Miyoko’s Cheese!

In an intimate interview on the Awesome Vegans Influencer Series with Elysabeth Alfano and re-run on The Plantbased Business Hour, Miyoko Schinner explains how and why she started Miyoko’s Creamery.

In a candid and relaxed discussion on Facebook Live, Miyoko shared a few things we all can get behind; her disapproval of the mistreatment of animals on dairy farms, Miyoko’s Creamery being a part of the solution to the climate crisis, and her new vegan cheddar cheese warming our hearts and tummies!

In her early days, Miyoko admits she would “cheat” by giving in and eating cheese from time to time. “That was the hardest thing. I didn’t eat cheese very often, but occasionally I would cheat,” she explained, “but when I finally made the connection about the babies being taken away (from their mothers), it was like, okay, I can’t cheat anymore.”

Her decision to go full-on vegan eventually led to the launching of Miyoko’s Creamery. Giving up cheese was a tough decision, so making her own vegan cheese was on her bucket list of must-dos. Miyoko credits her husband for spring-boarding her into action, as Elysabeth notes, “as a line of self-defense.”

“One day (my husband) said, ‘I’m tired of not having cheese in the house.’ And he started buying cheese. And next thing you knew, I had cheese in my refrigerator. And that was it. I was like, ‘Okay, this cannot happen!’ And that’s when I started playing around with vegan cheese.”

Here’s a clip of Miyoko sharing with Elysabeth her early days of veganism and how she launched a line of vegan cheeses:

Fast forward several years and Miyoko’s newest products, melty-gooey Cheddar and Pepper Jack Cheeses (cashew-free and indistinguishable from dairy cheese!), rolled out across Whole Foods last month. In addition, the powerhouse is suing the State of California for its restriction of the word dairy for vegan companies. Go, girl, go! 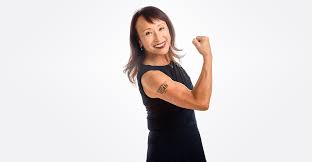 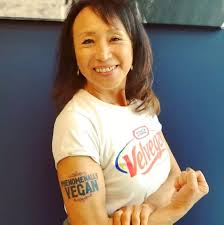 Citing Miyoko’s Creamery as a mission with a business, rather than a business with a mission, Miyoko wishes she realized how much our actions can really change the world. “I wish I had the conviction that I do now that we actually can change the food system. I think ten years ago I was thinking that I was hitting my head against the wall trying to talk to people about veganism and going plant-based. I had no idea the world would change this fast.  Had I known, I think I would have gotten started earlier on this type of activism through business.

“I’m just full of hope. I really do believe that this is the pivotal point when things are going to change. I think COVID is a really horrible time for people, but if we can see this is our opportunity to make change, it’s going to happen faster and faster. I’m very hopeful for the future of a vegan world.”